Four neutralization tests were performed on two final bio-oxidation liquors from the Ecuadorian commercial bioleach testing program, confirming that an environmentally stable ferric arsenate precipitate could be produced. The neutralization process, where limestone is added and calibrated to raise the pH of the bioleach liquor to facilitate the precipitation of the ferric arsenate, conclusively demonstrated that the precipitate passes the TCLP (Toxicity Characteristic Leaching Procedure) requirements for stability set out by the U.S. Environmental Protection Agency (“EPA”).

“These results tick another important box for us, as we formally wrap-up commercial bioleach testing with the information and results needed to press forward and accelerate our feasibility study (FS) and site negotiation efforts,” said Ross Orr, President and CEO of BacTech. “I’ve been actively connecting with all the right people throughout Ponce Enriquez and surrounding regions, and our opportunity space grows with every trip taken. The impact potential of a scalable bioleaching facility is enormous and I’m not leaving anything to chance.”

Duplicate neutralization tests were performed on each liquor, using both lime and limestone as the neutralization reagent. Neutralization was conducted in an agitated aerated reactor over a six-hour contact time as per commercial protocol for bio-oxidation plants. Test results showed that the amount of arsenic remaining in solution was 0.5ppm, while the quantity of iron was minimal (between 3ppm to 18ppm due to the presence of residual ferrous iron). This analysis confirms that the neutralization operation will produce a neutral clean water as a by-product that is suitable for recycling in the process. This finding is significant for BacTech as it will reduce the quantity of fresh water required on site.

The Toxicity Characteristic Leach Procedure (TCLP) test is a procedure to evaluate the long -term stability of the arsenic in the precipitate produced by the neutralization process. It is a favoured US EPA method for characterizing waste as either hazardous or non-hazardous as defined in the Code of Federal Regulations; RCRA 40 CFR Part 261. The test involves efforts to re-leach the arsenic into an acidic solution using a standardized protocol and aims to simulate long term conditions within a landfill. 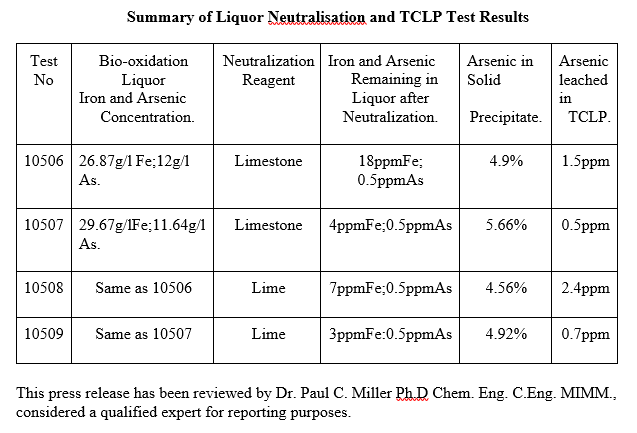 About the Ponce Enriquez Bioleaching Project

BacTech is planning to build its new owner-operated bioleaching facility in Ponce Enriquez, Ecuador, in a region where arsenic is well-known to exist in the gold ore.  The Company’s plan is to build a 50 tpd bioleach plant capable of treating high gold/arsenic material. A 50 tpd plant, processing 1.5 ounces of gold per tonne of feed, similar to feeds available to the Company, would produce approximately 26,000 ounces per year. Plant designs are modular and can be expanded without affecting ongoing production.

BacTech continues to investigate the prospects of establishing additional modern mining operations across other areas of Ecuador, Peru, Colombia, and Central America. Where possible, the Company will partner with national and local governments, non-governmental organizations (NGOs), and others to assist with the funding of these projects.

BacTech is a proven environmental technology company, delivering effective and eco-friendly biomining and remediation solutions to commercial operations to smartly process and recover preferred metals (gold, silver, cobalt, and copper) and safely remove and transform harmful contaminants like arsenic into benign EPA-approved products for landfill. Tapping into numerous environmental and economic advantages of its proprietary method of bioleaching, BacTech uses naturally occurring bacteria, harmless to both humans and the environment, to neutralize toxic mining sites with high-pay potential.  BacTech is publicly traded on the CSE under the symbol “BAC” and on the OTC as “BCCEF”.